Press:
September 19, 2017 – RainbowTail is a match-three RPG puzzler, coming to iOS on September 26th – pocketgamer.co.uk
July 28, 2017 – ‘Rainbow Tail’ Wants to Be ‘Candy Crush’ Plus ‘Pokemon’ and Is Looking for Testers – toucharcade.com

Rainbow Tail is an award winning match-3 game that allows you to collect pets (Gemlings) and use them on the match-3 board to help you complete your mission. With an art style that is easy to the eyes, Rainbow Tail is suitable to any match-3 game players from the young to the old, both male and female players.

Match 4 or 5 gems to summon Gemlings, then unleash powerful blasts to take down enemies and solve puzzles! If you find it difficult to beat a level, ensure that you train and upgrade your Gemlings to be more powerful. Finally, play together with friends or take them down in the Rockobo Arena!

Our game has attracted attention from the mobile gaming world. Some have drawn comparison between our game and Candy Crush and even the legendary, Pokemon.

First of all, RainbowTail is more than Candy Crush. It is more than just solving match 3 puzzles as there are plenty more strategies required involving how you use and choose your Gemlings.

Furthermore, RainbowTail draws comparison with Pokemon due to the fact that it has hundreds of collectible and evolvable Gemlings (or pets) in the game. However, beyond that, the two games have significantly different and unique gameplay on its own.

Excited yet? You should! Therefore, join our community on Facebook and Twitter for special announcement on events and more contents. 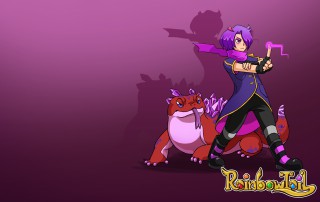